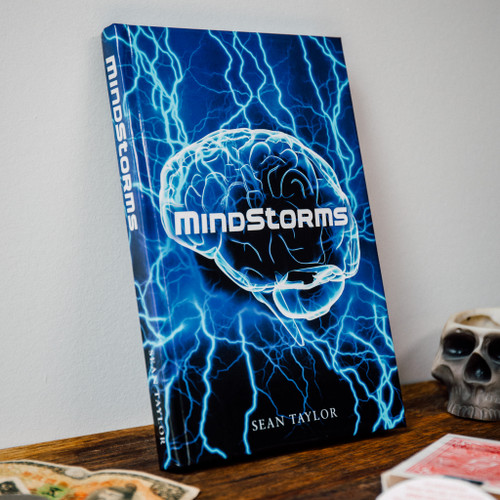 MindStorms was Sean's first mentalism book published in 2008 and by far our biggest seller. This unique publication brings together more than 20 routines from Sean's working repertoire and also details his feelings on the performance and presentation of mentalism.

The descriptions of each effect are detailed way beyond those usually included in magic publications and are littered with observations, advice and handling tips which can only come from hundreds of performances of the material. Several of the items in the book have been in Sean's armoury for many years and several are still in his current working act. At least three of them could have been released as standalone items and would, in the right hands, be worth the price of the book.

The Book Master - The Any Book, Any Page booktest system. No memory work, no forcing and no pumping.

The Throne Room - Sean's approach to the classic chair test. Four Audience members sit on four chairs and you have correctly predicted their seating position, not once but twice!

News Of The World - A newspaper test where the entire audience helps to select a single word from dozens of newspapers. A single word which matches a prediction in view from the outset. The performer is seated in the audience throughout!

The Pro Envelope - Perhaps the easiest and most versatile gimmicked envelope.

Survivor - You predict the last man standing in a live version of the popular TV show.

Anchors AHoy - Possibly the most convincing version of the David Hoy Tossed Out Deck yet.

Persuasive Banknight - This is the presentation that revolutionised the way Banknight is performed worldwide.