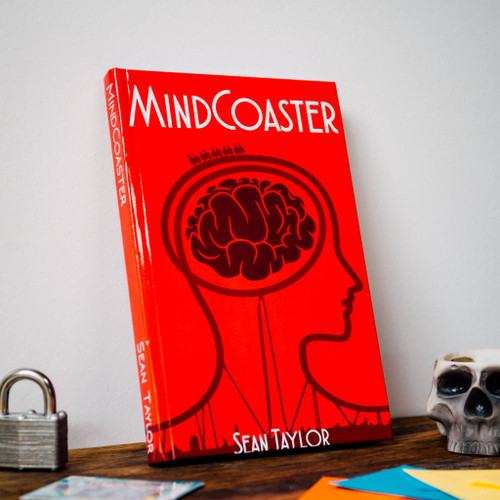 MindCoaster is the second book in the Mind series. Since MindStorms was released in 2008, it has become one of the most recommended books for the working mentalist, and is described by many as one of the best releases of the past 20 years.

In the same vein as MindStorms, absolutely nothing is left out and the routines have multiple variations and directions. What’s more, aside from a few thin cards, everything you need comes from the office store.

Here are just some of the highlights:

PsyConFabulous – This modular Confabulation is a current feature of Sean’s act and is adaptable to a wide variety of situations. If you like to theme your show, this is the perfect way. No forces, no carbon, no fishy double writing and it’s remarkably easy.

Fully Loaded Magazine – Free choice of magazine, page and piece and yet you reveal an avalanche of information in an uncanny view through the spectators own eyes. Freakishly clever ‘special’ magazine which you make up yourself. “You are a genius” - Marco Fida, Italy.

Lucky Strike – The whole audience is eliminated one at a time for a fun, macro effect that finishes with a prediction which is quite literally millions to one.

ONE – One card, freely imagined, appears in an envelope shown empty and held by the spectator. This Shaxon classic get a modern makeover and you won’t leave home without it. Fourthought – Shuffled deck is split fairly into 4 piles. 4 Spectators remove a card from their piles, mix it back and assemble the deck whilst your back is turned. You find all four with ease. This has fooled some of the greatest minds in magic.

LOTTO – Using Lotto tickets from your local news agency, this stage routine allows you to read the minds of 6 spectators for a perfect Lottery prediction.

Pro-Envelope Plus – A Clever development of the 2 way envelope which appeared in MindStorms. Add to these a 3 envelope test, a Q&A, some more close-up material and performance essays and you have more than 200 pages of solid working mentalism and mental magic.